It is becoming increasingly apparent that I should have stuck with basic titles for these blog posts, as I’m starting to run out of things to put behind the semi-colon. The issue of semi-colons and the grammar of academic paper titles was the subject of this afternoon’s chat with Jon and Clare, running through the refined prototype of Entitlement (our title aide-de-camp) and – sadly – moving from Plan A (mixing-desk style interface allowing the user to give weight to the citations in the paper, and so forth) to a visual representation of the main weighted options. There are a lot of comedy-use random title generators available over the internet, ranging from English Literature to Media Studies, from Academic Monographs to Systems Papers, or expanding into entire Postmodern Essays or Grant Proposals. I’m also glad to say there are some out there for fiction too- last week saw the LuLu title ranker, this week I’d like to introduce you to a title-prompter.

I spent some time today thinking about the panoramic narratives and options of what stories I want them to tell and how I want them to tell them. Lots of ideas, nothing definite to carry forward. Mark Wright dropped by to say hello at the end of the day, and to catch me up on some of his projects, so that gave me a spur to have something more concrete next time I see him… At the moment I have what I believe the technical definition is ‘lots of cool ideas’ and I need to turn them into ‘some meaningful ideas’ (then to be further refined into ‘one practicable idea’). 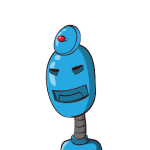 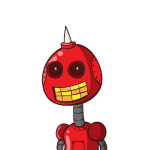 Nothing new from Ada and GIL today, but in amidst my searching for title generators, I found a robot generator! Above you can see how my mobile number, my name, and a couple of other short phrases would look if visually re-interpreted as pictures of robots.

On a less childish note, I also had a great chat with Micha Elsner, a computational linguist who has been looking at different models for analysing novels. While some kind of trade fair took place below us in the courtyard, Micha was able to clarify a few things for me about what might and might not be possible for the Writer’s Toolkit, based around difficulties in training machines to recognise implied and intuitive expressions of emotion in texts, since they lack our breadth of cultural knowledge and ability to contextualise. He also brought up some interesting imagery around the relationship between computer science and magic and – leading on – computer scientists as magicians. The transformative power of language is easy to recognise: I compliment you and you feel better, I insult you and you feel angry. But when it’s esoteric language then it inspires a push-pull of awe and fear. Think how exotically glamorous foreign languages are when we’re in a good mood, and how frustrating broken English can be when we’re feeling hassled. Think how both those things can lead into xenophobia. Just as religion and magic were closely equated when priests read incomprehensible phrases (latin & greek) from a magic book (the bible), through incomprehensible markings (illiteracy being rife) and then declared that you would either burn in hell or bask in heaven as a result- the power that gave them was immense. Likewise, programmers put a (to a layman) incomprehensible language (code) into a machine and then command machinery, empower us to talk to people on the other side of the globe, and do crazy-fast mathematics. From the outside, it does appear as a form of magic, and from what Micha was saying about the reading habits (Sci-Fi and Fantasy predominating) of Computer Scientists, there’s a self-mythologising going on there too. No wonder robots and computers can provoke that same awe-fear response of the unknown. We also talked about Jane Austen, just to balance things out…

2 thoughts on “Informatics: what goes here?”