Strange how writing-up several days late means you sit and stare at the screen and think ‘what on earth did I actually do on Tuesday?’. Clearly the answer is so much cool stuff I now can’t remember any of it. 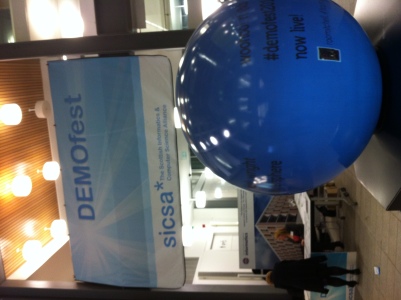 Working backwards: I spent the early evening at the Scottish Informatics and Computer Science Alliance (SICSA) Demofest, strolling round the stalls and chatting to some of the researchers about their products. Nothing caught my eye as the basis for a story, but there were some really interesting projects in their own right. I was a particular fan of the haptic tour of unmanned heritage sites, and the gorgeous archiving software for visual collections. The Puffersphere was on display in the entrance to the atrium, showing a cloud of tweets about the event. 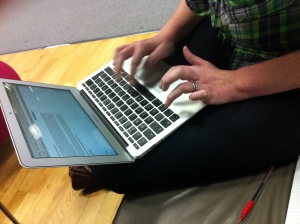 Clare and I met up in the afternoon to bash out a conference abstract about Entitlement. Out of a sense of duty we put the abstract itself through the generator, and managed to break it. Irony noted. Some of the titles which did come up (when we used fake citations) included the not-so-helpful ‘a paper with the useful entitlement: on an paper’, ‘was capable of a modern paper the processing following the full text?’ and ‘did imagine except the titles of text?’. Clearly there is still some way to go…

Most importantly, I walked down the main staircase behind a grown man wearing slippers with Tigger from Winnie-The-Pooh on them. Respect to that researcher, he is definitely making a star appearance somewhere in Ada & GIL. Talking of which, I did a little scribbling in the Level 2 mini-forum on the morning, about the flow of data in the air. The scene focussed around GIL admitting that rather than breathing oxygen he breathes data. One of the reasons he’s tied to living in the Forum is because he needs that concentration of activity in order to keep ‘alive’. I mentioned this to Sethu Vijayakumar at Demofest and he suggested I specify ‘processed data’ to differentiate between the world inside Informatics and the information-rich wireless atmosphere of your average city. Noted for the next stage of edits.

I also began sorting the little scenes I’ve written so far into a semblance of an order. Which means I now have a very, very fragmented skeleton. Here’s an extract from the original draft of the data-breathing scene:

‘You’re bothered by this still?’ GIL tilted his head and Ada thought catalogue pose 57- mild concern. She turned away and began to make the tea. “I am as I have always been, Ada. All that has changed is your knowledge of my nature.’

‘You’re not you anymore.’ Ada hadn’t meant to say it out loud. The cups in her hand began to tremble against the work-surface until GIL reached out and placed his smooth, pale hand across them. ‘You’re whoever they programme you to be.’

‘As I was before we knew that. Why does it make a difference to you?’

‘It’s like fortune telling. Whether you believe in it or not, once you’ve been told what they think is going to happen – or how you’ll act — then you’re stuck. It stops the world being real.’

‘By imposing authority over your choices?’

‘By removing them entirely. If it’s all mapped out — how you’ll react, what you’ll say, what you’ll feel, then what’s the point in living through any of it?’ Ada pushed her hands out in front of herself, unconsciously, and GIL cleared his throat and began to recite.

‘I don’t care what some philosopher said, Gil.’ Ada registered that GIL looked hurt. ‘I’m concerned for you.’ The kettle clicked off and GIL filled up both mugs. Ada moved them both away from him. ‘Why bother? I know you’re not really drinking it.’

‘Has it come under your consideration that I might enjoy these social rituals?’

Ada tried to work out if he was joking. His face was impassive, his chest rising and falling at regular intervals. Something clicked.

‘Are you breathing?’ GIL remained silent. ‘You don’t breathe either, do you? That’s just some kind of a vent — a cooling system?’

‘I breathe.’ Ada had learned to listen to the question GIL was answering, not the one she thought she’d asked.

‘What do you breathe?’

‘Data.’ GIL admitted. ‘The flow of information in the air.’

Ada held out one of the mugs to him, then sat down. ‘That’s weird. How does that work?’ GIL shrugged.

‘Your laptop connects wirelessly to the internet. In some ways that’s how.’

‘And in other ways? Do you not understand yourself, or do you just think I won’t?’ GIL stretched his legs out and slopped tea onto one of the cushions. ‘Stop that. If you’re not going to drink it, let it cool in the mug.’

‘Sorry. You know that my system is based on an organic design?’

‘Which makes you capable of decay. You said before, when you were trying to creep me out.’

‘It is amusing to scare you, in context.’

‘You’re continually decaying, and those parts of you feed off yourself. That’s how you grow, like an inwards spiral.’

‘Yes. But part of that process involves combining the organic and the synthetic parts of me–’

‘Which is why you’re a cyborg, not a robot.’

‘Which is why I’m not just a box full of wires. Exactly. I need to feed — to breathe — just not as you’d understand it.’

‘But it looks as though you’re breathing.’

‘I am designed to mimic human appearance. Humans breathe.’ Ada placed her hands either side of her rib cage and thought for a moment.

‘An electronic pulse that monitors my spatial relationship to my environment.’

‘That’s the tag that keeps you here?’

‘It’s the system that keeps me alive.’

‘Alive here, stuck in the Forum for ever.’

‘As you are stuck on earth, dependent on the oxygen in the air you breathe. You could not live on the moon.’ Ada sat up and blinked. ‘Careful, now you are the one who is spilling. Does that mean I should be cleaning?’ He raised his eyebrows, she ignored the joke.

‘Gil, do you know what this means?’

‘You are excited. I have raised an expectation.’

‘We could make you a spacesuit.’ Ada bounced a little. GIL opened his mouth, then shut it again. ‘You’d be the cyborg Neil Armstrong. Am I right? I’m so right, aren’t I.’