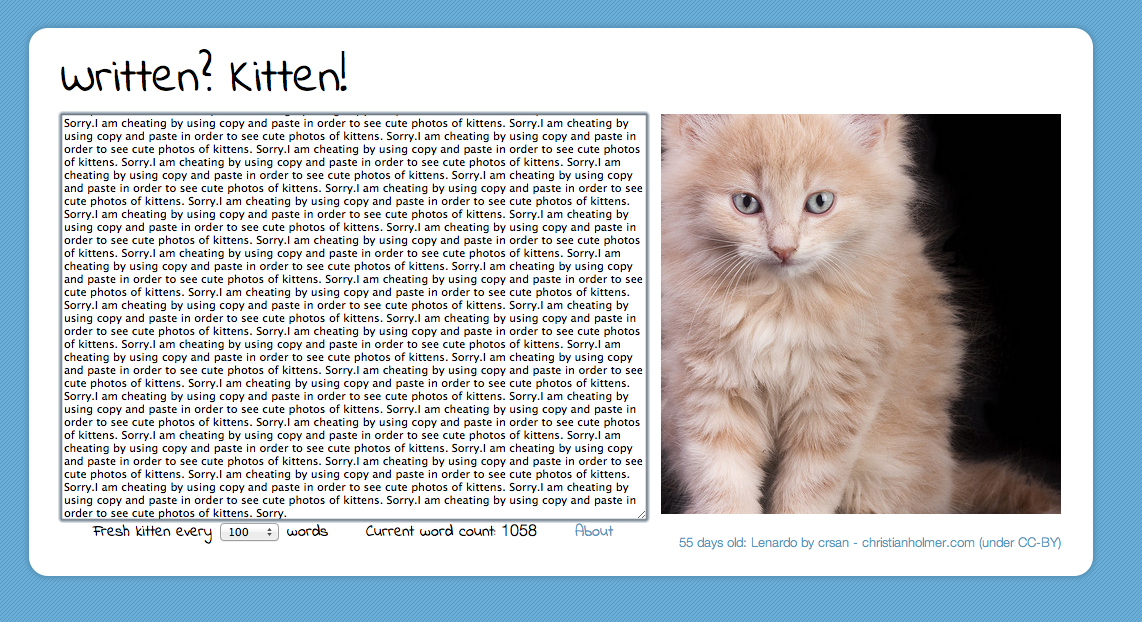 Today’s Special Mention goes to Dr Malcah Effron for bringing Written?Kitten! to my attention this morning. For every 100 words you write (you can vary the amount of words) you get a new picture of a kitten being cute. I’ve been trying with mixed success to keep up my daily 750 words, so I haven’t won any badges yet for that, but with the cheating power of cut-&-paste I managed to view several very cute kittens. The idea of automatic reward for writing short amounts seems to be a really powerful factor in online-writing tools, from the ranking element of the LuLu title scorer to the kitten in the latest find. Perhaps the important thing is to keep something both fun and meaningful; the concept of ‘play’ has been described to me in the past as meaningful activity without goals.

Having started to come up with some theories around the importance of enjoying writing and being playful with it, by looking into the background of Written?Kitten! I come across an app called Write Or Die. It describes itself as ‘a new kind of writing productivity application that forces you to write by providing consequences for distraction and procrastination’. The theory has therefore been reworked to consequences- positive or negative. We need to feel that our actions are meaningful, which we can measure by using them to get a reaction. Writing being a stereotypically solitary task (just you and the little person in your head), these kind of systems can give a sense of external validation to our levels of productivity, even if they are machine generated rather than the attention of an individual.

Aside from some scurrying around online looking at writing tools, today was a writing-focussed day. I spent some time down by the (now decorated) christmas tree in the Forum, doing the dual-writing for the panoramic narrative stories. Then I edited some film footage:

I’m leaving early to catch a lift to Newcastle for tonight’s a work Christmas do, so here’s the unedited openings of two of the panoramic drafts I’ve been working on. All the stories for the panoramic narratives are coming out dark and creepy so far, with waffle-irons and dead plants coming to life, vicious waiters throwing things, and dodgy traders. This pairing is supposed to be told from a child’s POV, but naturally it’s a creepy child/children:

It was always obvious that I was the favourite. The way they looked at me, eyes wide in delight. The way they murmured under their breath, too shy to talk to me directly.

One day in early winter, the ground was slick with new ice and I dug my thumbnail into the side of my palm in my pocket to distract me from the pain in my ears. The red half-moons were still there when I put my hands under the hot water tap at school, flaring and fading as the heat began to soak back into my marrow.

In the classroom, in the waiting space before the teacher arrives, they came and stood round me and asked me to shut my eyes and count to fifty.

I asked them why and they said that I knew why.

I hadn’t got much further than thirty — doing it properly, with a slow mississippi , making sure I didn’t lisp over the ‘threes’ — when they broke my attention by clattering away. I stopped counting, but I didn’t open my eyes until I heard the door slam.

I spent a little time checking behind the desks and the chairs and testing the door to the stationary cupboard, but I already knew I was the only person breathing in the room; the game had started.

The third time I circuited round, I found the first thing that was missing, then a second. I wasn’t entirely sure if they counted as the same thing or not. The wooden pegs by the door were empty. The wire shoe racks were empty. Even the two spare pairs on white-soled plimsolls that the teacher kept hanging by their laces in case of emergencies were gone; my feet weren’t cold until I noticed that.

It was always obvious that I was not the favourite. The way they looked at me, eyes wide in disgust. The way they murmured under their breath.

One day in early winter, the trees were still strung with dead leaves that rasped across the back of my coat like dry tongues when they pushed me against them.

I asked them why and they said that I knew why.

There was nobody in the playground when I got to school so I stood by the concrete pillar by the gates and I shut my eyes and counted to fifty. When I opened them there was still nobody there and I thought there might be a chance that the day was cancelled, perhaps because of all the snow at the weekend.

A car went past, then stopped a bit further up the road. The back lights lit up red and it began to reverse, slowly. I let go of the pillar and went through the gates and up to the closed green door. I tried to turn the round brass handle but my mittens just slid off. No traction; we learnt all about gripping and pivots and cantilevers last term. On my bare skin, the worn patches felt rough and almost warm, like scratched leather. The still shining tip of the handle was cold though, as if it hadn’t ever been touched for a hundred years.

The hallway was dark, but not empty. I could feel them there, breathing just beyond the edge of sound. I pulled the door to as quietly as possible and stood still, digging my thumbnails into the sides of my palms and waiting for my eyes to catch-up.

Bending down was awkward in my duffle-coat, so I rested back against the doorframe while I undid my laces. Across the dark wooden floorboards, the light moved in time with my feet, my white ankle socks whispering like small flashes that kept catching the corner of my eye and making me stumble as I ran.