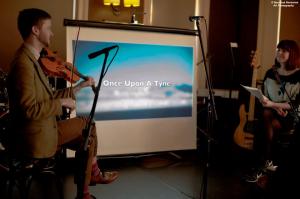 Last week the wonderful and eclectic poetry and music night, Trashed Organ, curated the fringe programme for the NCLA Festival of Belonging. As well as a series of workshops, they put on a stonking four night of diverse performances themed around different aspects of ‘belonging’. The final night was called ‘I Don’t Think We’ve Met Yet’, and I was delighted to be commissioned to work with Scotty Hartley, a traditional fiddle player, to produce a piece for performance on the night. We were told we could do whatever we wanted, for about 20 minutes, or display whatever we wanted (within reason) in the space we’d be performing in. Given that there was only a month and a modest fee, we were also reassured to hear that they were interested in seeing something start, rather than seeing a polished, final piece. 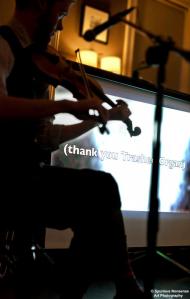 Scotty and I met for coffee and chatted about our practice and our backgrounds and he started telling me some of the traditional myths behind the first fiddle, such as the tale that the first violin was created by the devil out of the body of a woman. This theme can be seen in a number of different traditional ballads. The main fiddle that Scotty plays was made by his grandfather, and we talked about the associations between songs and places. Anyone who has heard me sing will be relieved to hear that we ruled out producing a song. Since I knew John and Mel were providing a digital projector as part of one of the other performances we decided to do something that involved Scotty playing live, with some kind of audio-visual storytelling accompanying it. We discussed our own ideas about how ‘belonging’ could be interpreted. I’m uncomfortable with using my own autobiography as inspiration for my writing, but I have no compunction whatsoever in twisting other peoples to produce a fiction. So I took Scotty’s grandfather’s background as a starting point, mixed in with the half-myths and legends Scotty was telling me about the instrument itself. I’d also like to say a big thank you to Micha Elsner for listening to me ramble about the collaboration and then introducing me to the countless versions of the Ballad of Two Sisters.

I drafted up a fairy-tale, and started shooting some footage on a blogging camera (the Sony Bloggie I’ve been using for the Leverhulme residency, but without the panoramic lens attached). I sent the story across to Scotty, then we met up and he gave me the thumbs up and we talked a bit about how the performance could work. To be honest though, most of our working together involved us meeting up, teling each other we’d be fabulous, then chatting about boys. Which is the nicest part about working with someone: you’re working with a person, not a project, and as you get to know them as a person beyond the thing you’re supposed to be producing, that makes the work you do produce much stronger as you feel more comfortable. Something like that anyway.

I finished a full draft of the story – which turned from a fairytale into a sort of ghost story in the process (I blame Scotty for saying ‘yes, it’s a good idea if he dies in the end’) – and put together a rough cut of the footage. Which was a little something like this:

First cut- ‘Once Upon a Tyne’

Then I timed how long it would take to read the story out and had a wee panic as it was about 15 mins. So I re-shot some more footage and messed about with some of the roughness to make it smoother (one day I will learn the correct vocabulary for these processes). As a side note, if I hadn’t had the experience of working with Samantha Silver over the last year and learning more about how a film piece can be concieved and put together, I would not have had the courage to try this. Which goes to show how working collaboratively can broaden your interests and abilities. The final version we performed against was this:

Final Cut- ‘Once Upon a Tyne’

Scotty worked with the last-minute full version of the video and story to produce a framework for a live scoring, but our first rehearsal together was actually the performance itself. Although Plan A had involved me getting an actor to do a recording of the story linked to the video piece, we ran out of time pre-performance so instead I bit back my nerves and read it out alongside Scotty’s performance. When we got to the end and I looked over and saw that the credits were still running on the film I was delighted to see that our timing had worked out. I believe Trashed Organ were filming the evening, so I may be able to post an extract in the future. Changes I’d like to make having performed would be to change the pacing slightly, so that there were sections where Scotty could really let rip and do a solo, rather than only getting to play an accompaniment throughout. And neatening up some of the descriptions. But I was very proud of what we’d managed to achieve in a month, and delighted to be sharing the stage with the other three collaborations, which featured a mixture of excellent writing with live art, audience participation, music, performance, and video work from Ged Robinson & Degna Stone with Adam James Cooper, Alex Lockwood & Tim Jago Morris, Helena Venaki & Jake Campbell with Hannah Costanzo. Thanks again to Trashed Organ for inviting me to take part, to NCLA and the Arts Council for funding the fringe programme, and to Scotty for being so much fun to work with.