Calling it the first draft is somewhat coy; I’ve been sitting on this idea for a novel since February 2010, when I read an article in the Guardian Weekend revisiting Bill McKibben’s book Maybe One. Something clicked in my brain and I went off on an imagination riff on fertility economics in the age of climate change. Only the title – The Final Generation –  and my protagonist’s name – Olivia Sacred – have remained constant. I’ve rewritten the synopsis – making drastic changes – three times that I can remember.

I’ve drafted it out in bitty, partial ways several times all told. I’ve probably made about five attempts at writing the novel itself – most notably last November, for NaNoWriMo, when I got enough down to start getting a genuine sense of voice and purpose into the writing itself. Most of the time it has felt as though the novel has been waiting there, growing like potatoes, waiting for me to find the right tools to unearth it.

But Tuesday last week, I finished my first ‘full-length’ draft. It contains no highlighted sections with useful notes along the lines of ‘this is the part where he tells her he wants a divorce’ or blank gaps under a chapter title. It need the meat cleaver taking to it,  to be raked over for a lot more than typos. But the whole body of it is laid out, bare, ready for surgery. Which means I’ve been celebrating my writing rather than complaining about it (for a change). Specifically, I’ve been celebrating with an aptly titled bottle of wine, courtesy of my father, and a binge of theatre visits. 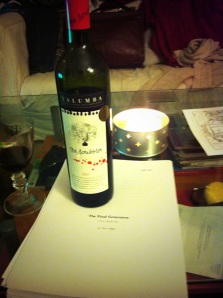 This is the point I had a lot of self-doubt about being able to reach, so to be here – with a lot of help from my lovely friends and family – feels wonderful. Thank you to everyone who has helped so far (I’ll save the name-checks for the acknowledgement pages when the novel makes it onto some shelves). And to anyone working towards a first draft of anything- the view from the top of the hill is wonderful, keep going & good luck.

3 thoughts on “Celebrating the first draft”