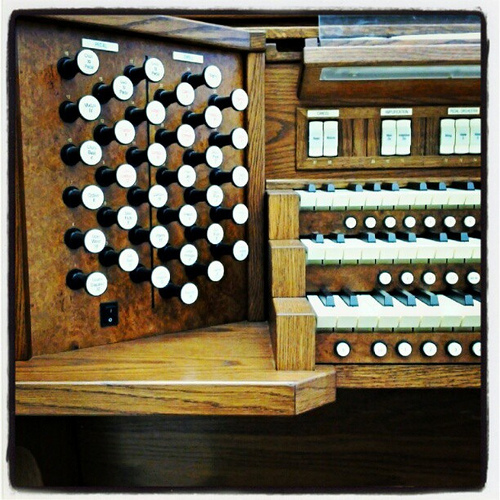 I don’t want any, thank you.  Can’t abide hot drinks; they turn my stomach.  Always been that way, ever since I was a child.

Am I bride or groom? Both. Neither.  You may have seen me in church, up the front.  Yes, that was me.

How kind of you to say so.  I’ve had it for ages, It’s so practical.  And I always think that black has the knack of looking appropriate, whatever the occasion.  Yes, I do quite a lot of weddings. The odd christening.  Funerals are my forte really.  Pass me one of those sausage rolls will you.

Wrong place to say it, but I find weddings quite sickly.  There’s nothing quite so wonderful as a funeral.  No, no, I’m being serious.  It quite makes my day to hear the slow toll of the bells when I’m walking to church.

That’s my cottage at the other end of the graveyard.  I could cut across if I hopped the fence, it’s quite low, but I don’t mind walking round on a day like today. Glorious, this weather.  Shame it won’t be like this next week, I’ve got two on Tuesday alone and they’re both burials.

As I was saying, There’s nothing like a funeral.  The family can never get enough of me, sometimes I even get tips. I’m always invited to the wake.  I get a chance to catch up with my regulars; we have such a good time over the platters of sandwiches, and there’s usually a free bar.  Not like here.

I wouldn’t dream of complaining.  It’d be rude.  But it seems a bit off to invite people along and expect them to pay for their own orange juice. I heard there’ll be champagne for the speeches, but I wasn’t planning on staying that long.

My best gig? Hard to say.  So many good times, over the years.  I know I don’t look it, but I’m not as young as I once was, catch my drift.  I played a recital in St Martins once, accompanying a visiting musician. It was fairly impromptu, and terribly exciting.

He was a violinist, from Germany if I remember rightly.  When he played, he was transformed into lightening. It took my breath away.  With him up there on the lectern, and me seated over at the side, we were perfectly matched.

Unfortunately, off stage he was only about five foot tall.  We stumbled into each other after the recital, in that narrow corridor off the vestry.  His nose touched my collarbone, he was that small.  I distinctly remember it, because he was sweating all over from the performance, and it left a watermark. I wore a lot of silk when I was younger.  It was just a phase, but the dry cleaning costs were astronomical.  The foolish vanities of youth.

He stayed in the region for two months.  We played together once, the first week of his visit. And I met him at least four other times after that; twice by accident.

I don’t generally give recitals.  As I mentioned, funerals are my forte.  But I really pulled out all the stops, that time.

Yes, weddings bore me.  Nobody ever asks the organist to dance.  After funerals, they give me flowers.