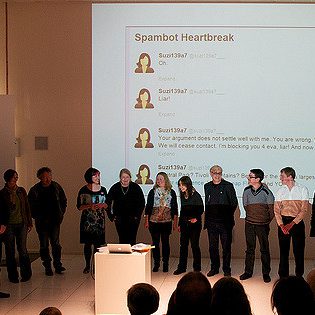 My year as Leverhulme Trust writer in residence at the School of Informatics, University of Edinburgh

As Leverhulme Trust writer-in-residence at the School of Informatics, University of Edinburgh, 2011-2012, I spent a delightful year discovering the intricacies of machine learning, talking to researchers about their work, and running a series of workshops using traditional creative writing techniques for staff to re-think the way they approach their academic writing. I also took part in the Edinburgh Science Festival TweetTest as a pseudo-celebrity, co-created an academic paper title generator called Entitlement, and co-supervised two MSc students.

My experiences fed into several pieces of creative writing, including a novel-in-progress with the working title Prototype, about a cleaner who makes friends with a robot. As the residency coincided with the centenary of Alan Turing’s birth, I became particularly interested in conceptions of artificial intelligence, and edited a digital anthology of work inspired by Turing’s life & legacy, called Take Tea With Turing.